Evaluation of the Effects of Yogurt

This study evaluates the effects of a yogurt formulated with a new lactic yeast,

Kluyveromyces marxianus fragilis B0399, in patients suffering from IBS. A double blind, monocentric study, controlled against a yogurt containing Streptococcus t, Lactobacillus b and Bifidobacterium lactis BB1, in parallel groups, in patients affected by IBS.The subjects assigned to the treated group presented a global satisfaction significantly superior compared to the control group.

This study evaluates the effects of a yogurt formulated with a new lactic yeast,
Kluyveromyces marxianus fragilis B0399 in patients suffering from IBS. A double-blind, monocentricstudy controlled against a yogurt containing Streptococcus t, Lattobacillus b and Bifidobacterium lactis BB12, in parallel groups, in patients affected by IBS. (Total patients- 92; active treated group- 46; control group- 46).

The study comprises a collection of data in three phases: pre-treatment (basal), treatment and “washout”, for a total duration of 8 weeks for every patient. In first analysis, a significant reduction of bloating and a regularization of the number of evacuations were observed.

Also, the “active” treated group had a statistically significant reduction in the characteristics of the evacuations, a composite score that includes both the urgency to evacuate in patients with diarrhea and the difficulty to evacuate in constipated patients (confirmed also by the comparison between the two treatments).

Furthermore, the subjective impression on the global effect of the treatment supports the objective clinical observation of a reduction in the difficulty correlated to the characteristics of the evacuation. The subjects assigned to the treated group presented a global satisfaction significantly superior compared to the control group, both at the end of the treatment as well as at the end of the study (P=0.002 e P =0.001) and therefore the patient was guaranteed a sense of subjective well-being by reducing personal discomfort.

Irritable bowel syndrome is a common gastrointestinal functional disorder, characterized by coexisting abdominal pain, discomfort and alterations in the frequency and composition of the feces. IBS frequently reduces the quality of life with implications that reflect in the social sphere and in the personal activities of the patients, but a therapeutic target that can alter the natural history has not yet been found.

This clinical study wanted as its objective to demonstrate the effectiveness of a “new” yogurt in reducing the symptoms of the pathology; therefore, bloating and meteorism, abdominal pain or discomfort, the number of daily evacuations and the characteristics of the evacuations were examined. Because IBS is characterized by strong interpersonal differences in the perception of symptoms, and since the clinician is still not in possession of a test to objectively evaluate the symptoms of a patient, a daily clinical diary was used.

The results were evaluated as modifications of the symptomological scores in relation to the base course of the patient, so as to steer away from interpersonal differences of the perception of symptoms.

In particular, it was divided by data collected in the pre-treatment observation (basal) phase, in the treatment phase and in the wash-out phase, for the total duration of 8 weeks for each patient.

Assignment of treatment. At the end of the basal period, the patients were consecutively randomly divided into 2 groups.
Treatments in study. The patients were randomly divided into two groups.
The treated group was supplemented with a yogurt, cod.AB262, containing Streptococcus t, Lattobacillus b, Kluyveromyces marxianus var fragilis B0399 (107 CFU/dose) and Bifidobacterium lactis BB12(109  CFU/dose).
The control group was supplemented with a yogurt containing Streptococcus t, Lattobacillus b and Bifidobacterium lactis BB12.

The patients ate one small jar of yogurt a day, at any time during the day, for the entire period of the treatment (4 weeks).
Patients. From February, 2009, to June, 2009, 92 patients of both sexes were enrolled, under the supervision of the gastroenterology ward of the S’Orsola-Malpighi Hospital of Bologna. All the patients met the criteria of inclusion and exclusion; in particular, all suffered from Irritable Bowel Syndrome, according to the diagnostic criteria of Roma III.

Every two weeks the consistency of the feces was evaluated, according to the validated Bristol Stool Scale. At the end of the treated period and at the end of the wash-out period, the experimenter personally asked the patient his global impression of the efficacy of the treatment.

From the data collected, a trend seems to emerge which confirms some of the hypotheses presented; in fact, both products in the study had a positive effect on the symptoms of the patients.

By further analyzing the data, a significant reduction of abdominal bloating and meteorism was noted, along with a regularization of the number of evacuations in both groups of the study.

In this study, the data of the effect on humans of a new probiotic strain is reported.
Kluyveromyces marxianus fragilis B0399, a fungus commonly found in fermented lactic-dairy products (cheese and kefir) has already been studied and introduced in clinical veterinary practice.

Studies in vitro, implemented with the aim of evaluating the possible implications of dietary technology, took into considerationKluyveromyces m. as a possible fungus with probiotic action (Kumura H, J. Dairy. Sci 2004). In these models, the capability of the fungus to both adhere to the enterocytes and to be able to grow in a culture even in the presence of bile (colic acid 0.1%) was demonstrated. In the rat (Yoshida Y, Biosci. Biotech. Biochem 2005) the dietary supplementation with Kluyveromyces m. increases the fecal concentration of sterols and the caecal concentration of SCFA (Short-Chain Fatty Acid). This result derives, in themurine model, from the suppression of the dietary absorption of cholesterol, from the action of the entero-hepatic circuit and on the synthesis of SCFA.

In first analysis, what emerges from the administration in humans is a profile of tolerance and effectiveness not inferior to other probiotics.
The primary end-point was, in fact, reached in that the treated group reported both a significant reduction of the bloating symptom and the regularization of the number of evacuations.

There was also another noteworthy result: the treated group reported a statistically significant reduction of the characteristics of evacuation, a composite score that comprises both the urgency to evacuate in patients suffering from diarrhea and the difficulty in evacuation in patients suffering from constipation. The data regarding the decrease of the characteristics of evacuation is also confirmed in the comparison between the two treatments.

Tab.2.1 – Reduction of the score vs. basal – Comparison between treatments

Tab.2.2 –  Success relative to the characteristics of evacuations in the second week of wash-out.

From a clinical standpoint, the theoretical hypotheses have been confirmed that a beneficial effect on humans would be observed as has already been reported in the veterinarian field.
It is not known today whether if in humans it’s the increased endoluminal synthesis of SCFA which influences the micro-inflammatory mucosa, or if it’s the colonization activity on the part of the fungus of the mucous bio-film,  or if therapeutic mechanisms not yet known come into play. 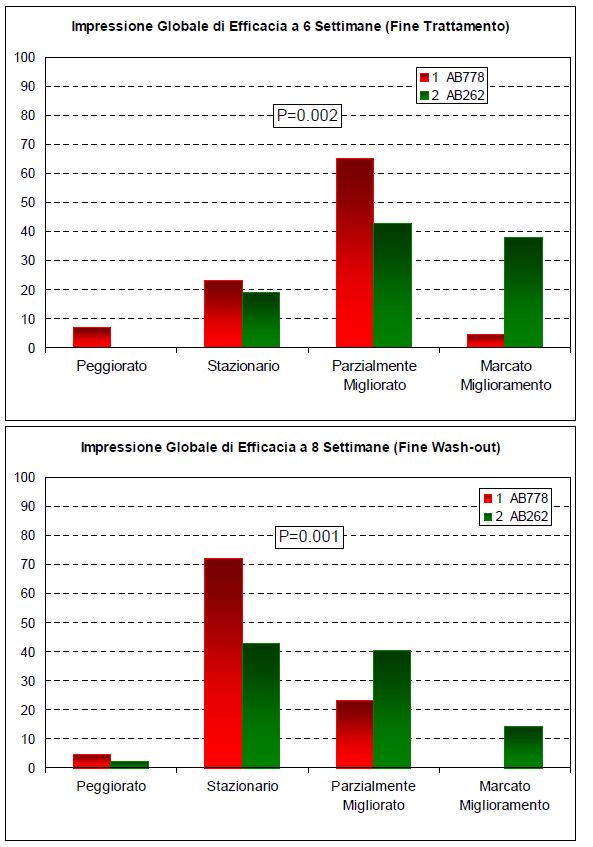 Finally, the subjective impression of the global effect of the treatment supports the objective clinical data of reduction of the difficulty correlated to the characteristics of evacuation. The subjects assigned to the treated group presented a global satisfaction superior to those in the control group, both at the end of treatment and at the end of the study (P=0.002 e P =0.001).

In reviewing literature, there are few studies which conclude with the demonstration of clear evidence of superiority of one preparation compared to another.

The use of a control group which was supplemented with a yogurt containing probiotic strains demonstrates that  Kluyveromyces marxianus fragilis B0399 is active and effective in controlling symptoms of IBS and, in particular, at least from the data in our possession, guarantees the patient a sense of subjective well-being, reducing personal discomfort.

The significant improvement of most of the symptoms on the part of both products is evident; Two new probiotics (Kluyveromyces marxianus fragilis B0399 and Bifidobacterium lactis BB12) are added to the list of the biologically active substances in gastroenterology; one ((Bifidobacterium lactis BB12) is already known for other strains of the same species and this is, in a certain sense, a confirmation; the other, (Kluyveromyces marxianus fragilis B0399) enters for the first time on the short list of correctly tested probiotics.

The second aspect, of notable scientific interest, concerns a novelty: the superior effectiveness of Kluyveromyces marxianus fragilis B0399 on symptoms tied to physical activity and visceral hypersensitivity, which represents one of the aspects that is one of the most difficult to control in this affection: the characteristics of the evacuations and the global assessment that stems from the evaluation of the state of well-being by both doctor and patient, jointly.

Therefore, this work confirms that Bifidobacteria is useful in this category of patients and suggests that the new addition, Kluyveromyces marxianus fragilis B0399, represents a new, more potent and specific resource. It’s possible that its effectiveness may prove to be greater in certain subgroups of patients.

Find out how Viazorb™ works here!

This amazing product is available in a product for your family pets.
Check out our sister company
Techna Vet Industries Inc